Which Smoke Detectors Are Best For 2019 ?

The goal purpose of smoke detectors is to alert people of smoke or fire particles and help them to vacate early and avoid inhaling hazardous smoke. What are smoke detectors? These are devices that are designed to sense smoke as a primary means of fire and immediately send out signals of warning about it. They detect fire particles or smoke by help of photoelectric or ionization sensors. These sensors send signals to the alarm system, which in turn produces a loud voice and LED visible light as warning. 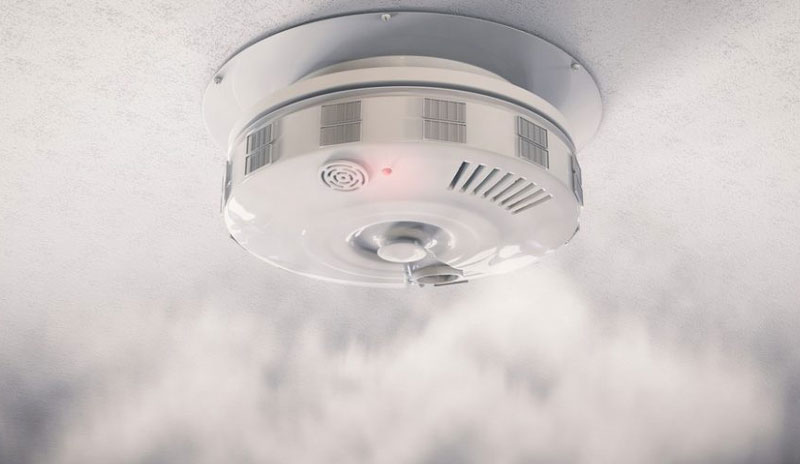 Ionization smoke detectors are made of radioactive materials that ionizes the air creating a current. When smoke enters this detector, it creates a current which triggers and activates the alarm system.

The are reliable and convenient to protect your family and property against fire. This is because they detect and sense even the tiniest and invisible fire particles. However, they have a drawback. Ionization detectors can be triggered by small and less serious smoke like shower and food. They easily create a false alarm.

Photoelectric smoke detectors are designed with a smoking sensing chamber and source of light that is usually aimed far from the chamber. When smoke enters, it defract light towards the smoke sensing chamber, which triggers the alarm system to send signals of alert.

These smoke detectors use both photoelectric and ionization sensors to trigger the alarm system,hence the name dual.

There are different types of smoke detectors in the market today. These detectors use either ionization, photoelectric or dual smoke sensors. During our thorough research, we came up with a guide and list of the best and most reliable smoke detectors.

Why This 14 Smoke Detectors Are Best 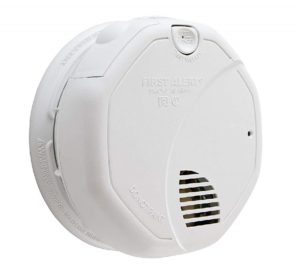 This is one of the best, reliable and first in performance smoke detectors. These detectors use both photoelectric and ionization sensors to trigger the alarm to produce loud sound and visible LED light. They are hardwired. However,they also have AA batteries that are used as power backup during power blackout. They are prone to false alarm but have a one tap button that helps to silence it. First alert 3120b smoke detectors are convenient and reliable with a worn out signals that alerts the owner when the unit is worn out and needs to be replaced. 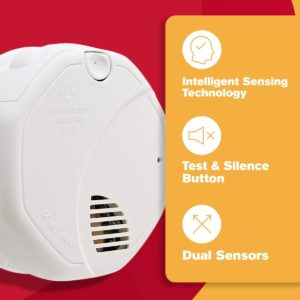 These smoke detectors are different to first alert 3120b detectors. How? They are battery powered and not hard wired. They use AA batteries power to operate. These detectors are considered the best and liked by many users, because they are reliable and cheap to acquire and maintain. They are also easy to install has they require no wiring. They use both photoelectric and ionization sensors with a 85 decibel alarm sound. The sound produced is always loud enough to be heard from far distance or in deep sleep. It has a silence button to silence false alarm. 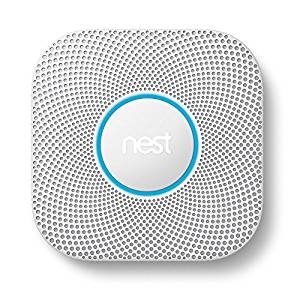 Nest protect are among the most ranked and well reviewed smoke detectors. They use dual smoke sensors to detect presence of smoke and carbon monoxide. This devices are technologically advanced as it is easily controlled via phone. I mean, it sends signals and alert to your phone to notify of any emergency at home or building. It is also possible to silence false alarms though phone.

Rather than phone connectivity, these devices also have LED indicators and audible alarms that produces red flash light and audible sound alarm respectively. 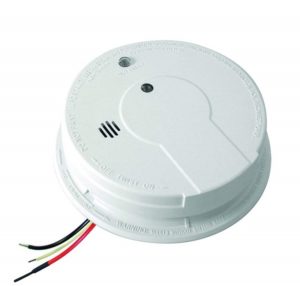 These are hard wired smoke detectors that detect presence of smoke,excess heat or carbon monoxide. They use ionization sensors to detect and send out early warnings of smoke or fire. They detect and sense even the less serious smoke. However, they have one tap button to silence noise from false alarm. They also have a locking tamper resistance to avoid dangers of fraud or theft. As seen above, these devices are hard wired. Nevertheles, they have a 9 V battery to use as backup during power outrage 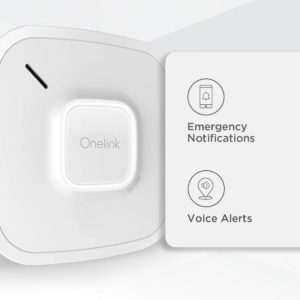 As the name suggests, these are safe, reliable and smart smoke detectors that use photoelectric sensors to send signals and alert of smoke, carbon dioxide or fire traces to people. Enabled by Alexa voice services, these devises can also play music, audio books, check weather and read news among others. They have a 85 decibel sound alarm and an advanced microphone to project sound during emergency. They also have LED indicators that produces red flash light as warning. They are well known as talk smoke detectors. This is because during warning, they send verbal message to alert the type of danger and the endangered location. They also have mobile notification that can send emergency alert through phone or tablet. Onelink safe and sound smoke detectors are important to keep your home safe and connected. 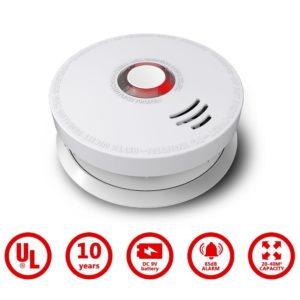 These are 9 V battery powered smoke detectors that use photoelectric sensors to sense smoke and trigger the alarm system to send warning about it. These devices detect smoke or fire particles, producing a loud sound and a LED red flash light as warning against fire. It has a silence button to silence the sound of false alarm. Seen earlier, these devices are battery powered. That means they are wireless and easy to install. 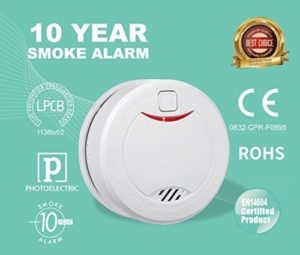 This is a battery operated smoke detector. It is powered by a lithium battery that last for ten years without recharge. It is a photoelectric type of smoke detector,that uses photoelectric sensors to trigger it’s alarm system to produce sound and light that warn against fire or excess smoke. Alert pro has a 85 decibel sound alarm that produces a loud voice that can be heard over long distance or in deep sleep. It also produces a LED red light that flashes after an interval of approximately 56 seconds. For efficiency, alert pro smoke detectors have low battery and worn out warning that enables the owner to know and get information about the device’s working condition. This guarantees proper family and property safety against fire. 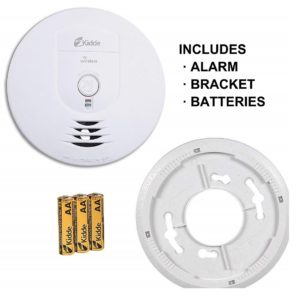 These are AA powered smoke detectors that use ionization sensors to detect and send early warning against smoke or fire particles. They are specially designed with the ability to use several wireless connected alarm. I mean, When one alarm is triggered,other connected alarms are also triggered, producing loud and audible sound. They are installed with 85 decibel alarm sounds and LED indicators that produce loud audible sound and red flash light respectively. 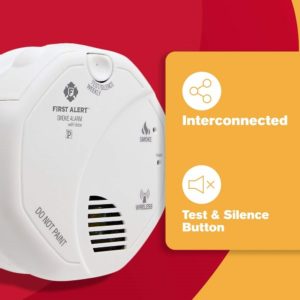 These are AA battery powered smoke detectors that use photoelectric sensors to detect and warn about smoke or fire particle. They have a 85 decibel sound alarm and a voice programmable location that produces loud sound and a verbal message about the area or location of danger. They are easy to install and are packed with a set of two alarms. These alarms trigger each other to produce sound during emergency. These devices can also be connected to 18 other wireless alarms.

It also has low battery and worn out warning that helps the owner to find out its working condition. They are prone to false alarm. However,they have a tap button to silence nuisance noise from such alarms. 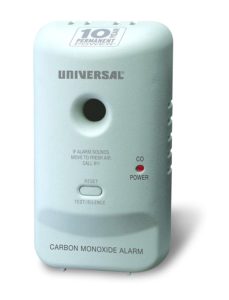 Manufactured by the famous universal security instrument company in the US, these detectors use alkaline and long power battery as source of power. They use both photoelectric and ionization sensors to detect presence of smoke or carbon dioxide. Detected smoke then triggers the alarm the produce sound and LED flash light as warning.

They use lasting battery that last for ten years without recharge. This helps to eliminate high electric cost, low battery chirps and the need to regularly replace the battery. In addition, universal security detectors have advanced microprocessor technology that helps to differentiate between false alert and hazardous alerts. It automatically silence false smoke alerts like shower and food smoke. 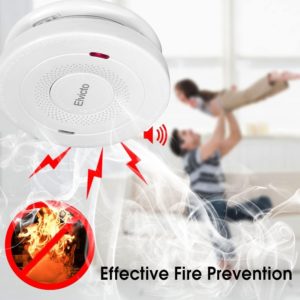 This are battery powered smoke detectors that use a long lasting lithium battery. More often than not, these batteries last for ten years without recharge. This saves electrical power cost and expense of replacing the battery regularly.

It uses reliable photoelectric sensors that detects smoke or fire particles and send early signal to alert and protect people from fire. It has a 85 decibel sound alarm that produces loud audible voice. They also produce LED red flash light as warning. It has a one tap button to silence false alarms. Due to their long lasting batteries, they are convenient and can be used during power outrages. 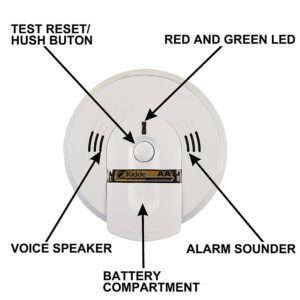 These are among the best smoke detectors. This is because they are reliability, convenience and affordable in price. They are hardwired types of carbon monoxide or smoke detectors. However, they have 2AA batteries to use as backup during power outrage. They use ionization sensors to detect the most tiny and invisible fire particles, carbon monoxide and smoke. This makes them reliable. They have LED indicators that produces red flash light as warning. Additional, they have 85 decibel sound alarm that produces loud sound and can be wirelessly connected to other Kidde alarms to improve their effectiveness. This alarm works differently under each situation. I mean;

– when they detect fire particles, the produce three loud beeps of sound and a talking combo that sends a verbal message of fire! Fire!

– when they detect smoke or carbon monoxide,they produce for loud beeps with a verbal message of the word warning!

These devices also have low power warnings that produces a brief beep sound at an interval of 15 minutes until it is recharged. Major drawback of these devices is that they are prone to false alarms. However, they have a tap button to silence nuisance sounds from false alarm. 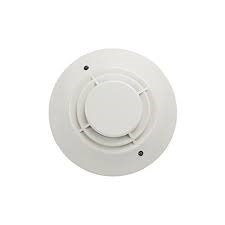 They are among the best and most preferred smoke detectors. This is because of their pocket friendly price. They are reliable and battery powered devises that use lithium battery that can last for ten years without recharge. They use photoelectric sensors to trigger the alarm which produces loud audible voice and visible red light as warning. They are convenient. This is because they have extra advanced LED indicators to distinguish between a normal and dangerous smoke. They produce green light during normal smoke and red flash in a serious and dangerous smoke. They have smart check that send signals whenever they need to be cleaned and cleared from dust and smoke particles. This prevents false alarm. Honeywell are not hardwired thus easy to install. They are designed with a sturdy base for easier mounting or installation. Rather than smoke sensors, honeywell also also have heat sensors thy detects high or extremely low heat in a room or building. 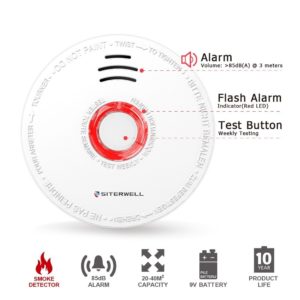 These are 9v battery powered smoke detectors that are designed to sense smoke or fire particles by use of photoelectric sensor. They have LED indicators that produces flash light. They also have alarms that produce audible sound alert. They use non radioactive chemical materials thus suitable to install in bedrooms.

Have you ever wondered why most fire breakouts happen at night. This is because in deep sleep, some smoke detectors are hard to be heard. This calls the need to purchase the best smoke detectors from the most trusted manufacturers. It is also important to consider detectors with several alarm connectivities.

For effectiveness, it is important to maintain your smoke detector and clean it regularly to prevent false alarms. You should also check your device’s expiring date and the appropriate time to replace it.

Tags: Which Smoke Detectors Are Best
ShareShareTweetPin
Next Post

How To Get Free Government Internet And Laptop

Best Ways To Get No Money Down Cell Phone Plans